Intake Filter in a Mansion Elevator 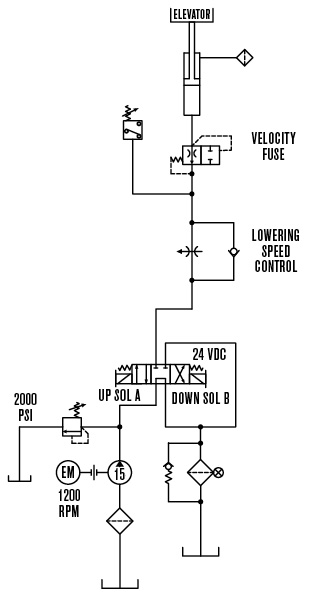 A well-known actor had a small elevator installed in his mansion that sits on top of a Tennessee mountain. He wanted it to lift two people up 20 feet to a roof-top balcony. Since there was not a roof to mount the typical electric drum and drive, a hydraulic lift was installed. The circuit was simple, using a vane pump running at 1200 RPM to keep the noise level to a minimum.

The hydraulic system was designed so the maximum pump flow determined the lifting speed and a flow control determined the lowering speed. The control system was designed to use 24 VDC with a battery backup in case of a power failure. Since the valve was directly operated, battery power could be used to shift the valve and lower the elevator down from the roof top. It is questionable if the designed circuit met all state and local safety standards.

After a year or so, each time the unit was started, it rumbled for about two minutes and then settled down to a normal running sound. The system designer was nowhere to be found, so a local repair shop was contacted. The employee concluded the unit was losing its prime. Since there were no signs of external leakage where the air could be getting in, the repair shop employee convinced the owner that a check valve installed in the inlet line would solve the problem.

The unit worked well until one day the electric motor overloaded, tripping while lifting the elevator, causing a jerk. Then a loud bang was heard, followed by the elevator lowering to the bottom, even though the raise button was selected. The passengers were only four or five feet up on their way to the roof when this happened, and luckily no one was hurt.

It was found that the externally accessible inlet filter’s top cover plate had failed and blew oil everywhere.

What caused this to happen, and how could it be resolved?

The mansion elevator that blew its intake filter top off was caused by a failure of the electric motor with the directional valve still shifted. The cap end of the lifting cylinder was connected directly to the stopped vane pump, allowing the backward flow of oil, supporting the lift to build up pressure in the inlet line of the pump. The check valve that was installed to solve the priming problem would not allow the oil flow to drain back to the tank. The weak point in the inlet line was the intake filter’s lid failing, spraying oil everywhere.

2 thoughts on “Intake Filter in a Mansion Elevator”