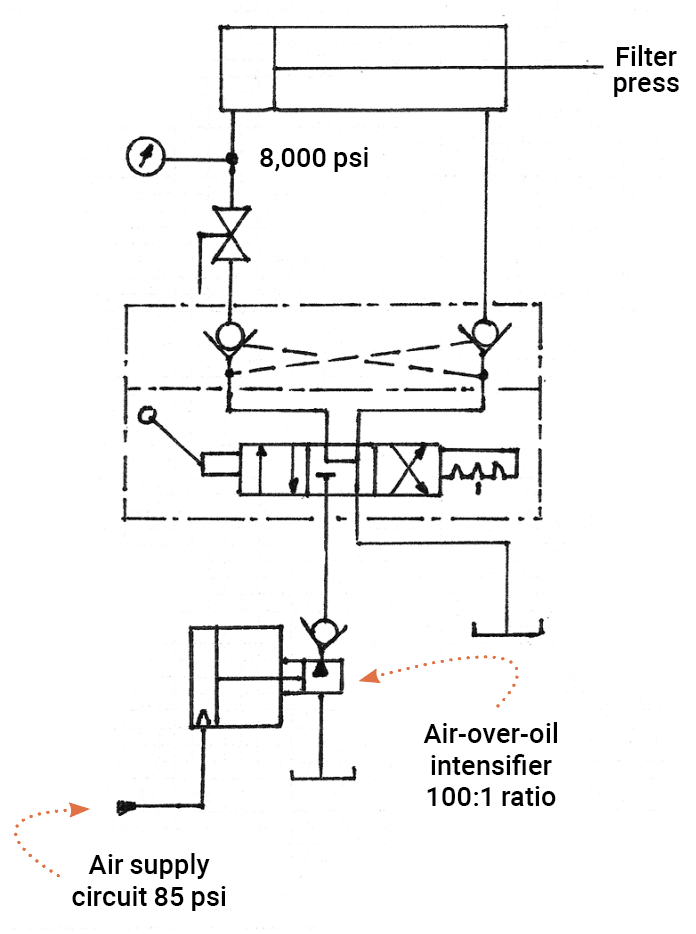 We were called in to look at a filter press that, when closed, needed to hold 8,500 psi (586 bar) for several hours. Used in various industries, a filter press separates liquids and solids using pressure filtration. A slurry is pumped into the filter press and dewatered under pressure. The press can be used for wastewater treatment in a variety of different industries and applications. Basically, the press is used to squeeze water out of the product waste with pressures as high as 10,000 psi (690 bar).

They did not have a circuit on this machine, which was 25 years old, so the sketch on the left is what I felt the circuit to be.

They described the normal cycle as follows:

The problem they were having was that the pressure applied would hold at 8,500 psi (586 bar), but after 2 to 3 hours, it would start dropping down to 5,000 psi (345 bar) in less than an hour and hold there with the air/oil intensifier cycling constantly. The side of the directional valve stack that included the pilot-operated check module was hot to the touch. Nothing else showed any hot spots. If the ball valve on the back of the cylinder was closed, the 8,500 psi (586 bar) would start very slowly to decay and reach the 5,000 psi (345 bar) reading after 3 to 4 hours with the intensifier turned off. The cylinder had a small leak path across the cylinder piston.

What is the solution?

The filter press circuit that started at 8,500 psi and dropped to 5,000 psi had two problems. The first was that the pilot-operated check was leaking; the second was that the four-way directional valve spool was scarred and leaking high-pressure fluid back to the tank. The air-over-oil intensifier could have been replaced with a larger output unit to fix the problem, but it was the leaking valves that caused the problem.

The directional valve leakage increased as the oil heated up, and the 5,000-psi pressure drop would leak the entire intensifier output back to the tank. Increasing the oil viscosity could have been a possible fix, but the actual problem would still exist. Changing the directional valve and pilot-operated check valve stack solved the problem.

We also pushed them to install a return line filter. There was no filter anywhere on the oil circuit.

One thought on “Intensifier Drops from Required Pressure after Several Hours”