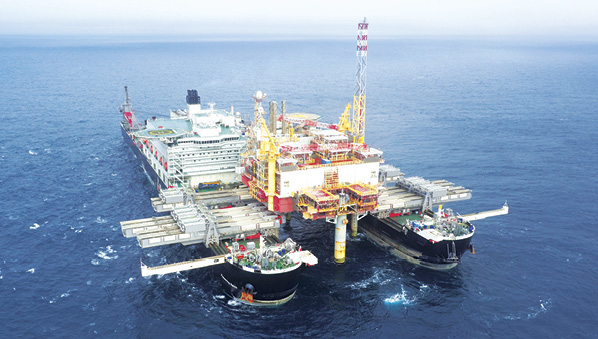 It was the biggest assignment employees at Bosch Rexroth in Boxtel had ever faced, and it took more than two years to carry it out. But they seized with both hands the opportunity to research and supply the hydraulic components and associated local controls for this lifting system onboard the Pioneering Spirit, conceived and developed by Allseas.

The request came from Founder and Owner Edward Heerema of offshore specialist Allseas for a specially designed ship to lift entire offshore platforms off their piles in a single movement, for which the company had developed in-house a complete motion compensation system and associated control system. It also wrote the software for the principle behind the motion system. Heerema asked employees at Bosch Rexroth to further develop the design of the hydraulics and the arrangement of specific components of these lifting beams, and to supply specialist hydraulic components and drive systems.

According to Ron van den Oetelaar, managing director of Bosch Rexroth Benelux, “We’d already worked closely with Allseas engineers in Delft in the past on other projects, so we had already supplied all sorts of components for special ships laying pipelines in the ocean.” He added, “Working closely with Allseas engineers, who developed the unique form and functionality of the ship and the principle of the lifting beams for the ‘topsides lift system,’ our engineering team investigated various technical control options for the individual lifting beams.”

The team looked at many different variations: hydraulic, electrical, and hybrid combinations of both technologies. According to Ron, the hydro-mechanics and electro-mechanics were a challenge, but so was the digital technology (controls, software, bus systems, etc.). Allseas wanted the ship to handle platforms weighing up to 48,000 tons.

“That’s no easy task,” said Ron, “especially when you realize not only how accurately, but also how fast, it has to happen.” During the development process, countless tests were carried out and simulations performed so that, together with the engineers at Allseas, they could find the optimal solution. “When after a couple of years’ development, we had got it right ‘on paper,’ we were given the job of manufacturing and supplying the hydraulic components and drive systems for the individual beams.”

It used to take ships with cranes and dozens of workers weeks or even months to construct or dismantle a platform piece by piece on the open ocean. Pioneering Spirit, 382 meters long and 124 meters wide, can lift the top section of a platform off its piles in 9 seconds. The motion compensation system is activated during preparations to pick up a platform. It consists of 16 lifting beams operated from the bridge of Pioneering Spirit. Using the lifting beams, a platform is raised 2.5 meters in a single swift movement so that the topsides of the platform become detached from the substructure. Then the ship moves away, and the topsides is carried towards the shore.

The technology applied in this situation by Allseas, also known as “swell compensation,” is exceptionally complex due in part to the simultaneous movements of the lifting beams among multiple axes.

For this assignment, was it possible to use standard components from the Bosch Rexroth range, or were custom components required?

“Standard components can rarely be used for special projects of this size,” said Ron. “Apart from a few catalog components, such as valves and plunger pumps, most of the components and subsystems were developed specifically for this ship. This includes cylinders, control devices, generators, mounting plates, etc. The local digital control systems that we supplied for the lifting beams were also developed specifically for this assignment. That applies to both the control hardware and the software.

“During the design process, we made intensive use of powerful simulation tools to predict system behavior, finite element methods to compute critical parts and components for strength, and analysis techniques to identify risks in the process flow. But it’s always exciting when the first job gets underway. That took place last August and involved lifting the 13,500-ton top section of the Yme platform off the Norwegian coast. Everything worked perfectly.

“Since then, the remaining four lifting beams (including Bosch Rexroth components) have been installed on the ship for larger lifting jobs. It’s great that our designers, production staff, service engineers, and other technicians have been able to make such an important contribution.”