Workers at a private contractor that makes torpedoes for the U.S. Navy were having a problem with an assembly line directional valve coil that would burn out often, causing production issues. The valve, a D05, three-position, spring-centered, 115-volt AC explosion-proof design, continually lost the retract side “air gap” solenoid coil. The assembly line took six months to install and debug. Once it was turned over to production, this problem started showing up.

The OEM sent a new valve, thinking there must be a problem with the original unit. It didn’t help. The contractors’ electrical engineer suggested they interchange the “A” and “B” ports to the cylinder and do the same with the two coils. The problem still persisted. Whichever coil controlled the retract function would eventually fail. The pump delivered 20 gpm, and the valve was rated for 26 gpm. 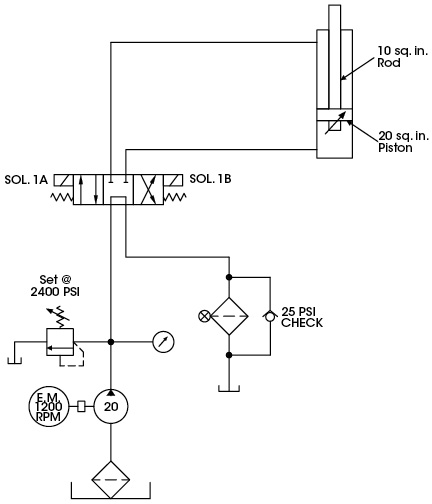 The D05 explosion-proof valve that was used on the Navy torpedo line had an air gap designed coil. This style of coil needs to fully shift for the high in-rush amps to drop to the low holding amps. This shouldn’t have been a problem, especially for new valves. However, because the cylinder has a rod to cap end area ratio of 2:1, the returning oil from the retracting cylinder would force 40+ gpm flow through the directional valve that’s only rated for 26 gpm. Many valve spools will try to move to the center position when their maximum flow rate is exceeded. This will cause the air gap solenoid to move off of the fully shifted position, increasing the holding amps causing the coil to fail. The OEM replaced the D05 valve with a larger valve to solve the problem.