Fluid Power Professionals and The Military

The IFPS is an approved organization by the United States Department of Veterans Affairs (VA) to provide reimbursement for certification test fees.  If you are eligible, the VA can reimburse you for taking IFPS-approved certification tests.

You may be eligible if you qualify for any of the following:

The following IFPS certification tests are approved for reimbursement:

How Much Can You Receive?

Where can you get more information?

If you have questions about certification reimbursement or applying for benefits, you can

Many IFPS certifications are approved through Army COOL and Navy COOL (Credentialing Opportunities On-Line.) Credential voucher or reimbursement for credential exam, recertification, or maintenance fee has been approved for payment through the Army or Navy’s Credential Program office.
COOL (Credentialing Opportunities On-Line) helps Army and Navy Service members find information on certifications and licenses related to enlisted ratings, designators, collateral duties/out-of-rate assignments, and officer designators. COOL explains how sailors and soldiers can meet civilian certification and license requirements, and provides links to numerous resources to help get them started.

COOL is a resource for


Veterans Who Attended the IFPS Annual Meeting in Charleston, SC 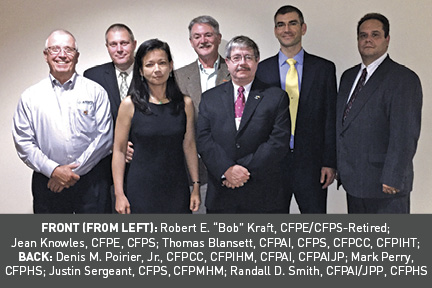 Bio: Co-founder (retired) of Kraft Fluid Systems and 2007 IFPS President
Military Experience: Bob was on active duty in the U.S. Navy from September 1961 to February 1965. After graduating from the Naval Officer Candidate School, Newport, R.I., and Navy Marine Engineering School, San Diego, Calif., he was assigned as an engineering officer aboard the USS Taluga (AO-62), a Navy oiler. He served aboard for two cruises of the western Pacific refueling ships in the South China Sea. In 1963, he was assigned as a project engineer to the Naval Ordnance Laboratory, Corona, Calif., which had fusing responsibility for all air and surface-launched Navy missiles.

“My navy experience gave me some basic hands-on training, but most of my early fluid power training was with my first employer, Paul-Munroe Hydraulics, in Los Angeles, Calif.”

“The Navy had great schools and training for technical fields that were top notch. By the time I left the U.S. Navy and went into civilian world at age 27, I was far more technically advanced and worldly advanced than my civilian counterparts.”

Bio: Sr. Systems Test Engineer, Northrop Grumman Marine Systems
Military Experience: Randall spent 12 years as a nuclear Machinist Mate aboard submarines. After Nuclear Power School, he spent four years on the USS Will Rogers SSBN 659, a year on the USS Fulton AS-11, two years at the Enlisted Education Advanced Program attending college at the University of New Haven, and a final four years as the M-Division LPO on the USS Kamehameha SSN-642. After active duty, he spent four years as utilities man in the Naval Reserves in Brave Company of NMCB 23.

“I came to the design world in hopes that I could make operation and maintenance in the fleet easier by bringing the true customers’ view (the deck plate sailors) into the design process.”

Bio: Area Vice President, Applied Industrial Technologies and 2014 Chairman of the Fluid Power Educational Foundation
Military Experience: Commander Knowles entered the U.S. Navy Reserve in 1991 as a midshipman at the U.S. Merchant Marine Academy. Her extensive military experience includes serving as Commanding Officer of NR Commander Fleet Activities Chinhae South Korea Detachment 8 supported by Navy Operation Support Center Boise, ID (2007-2009), as well as Training and Operations Officer with U.S. Pacific Command Detachment 501 as a military planner (2010-2012). She currently still is a SELRES but also maintains her USCG licenses and is within the U.S. Navy MMR community as a third mate and third assistant engineer. As a selective reservist, she is committed to drill one weekend a month and at least two weeks a year on deployment.

“I know as a leader I need to lead by example, to be the most committed to the mission, ask of others only things I would be willing to do myself, never give up, always take the high road, take pride in the job you do, support your people, encourage your people, and take good care of your people.”

Bio: Product Manager – Engineered Systems/Behco-MRM and 2014 IFPS President
Military Experience: Tom served in the U.S. Navy for nine years and nine months active duty and then for another six years in the active US Naval Reserve. He was honorably discharged as a Machinist’s Mate Chief Petty Officer (E-7). He was a certified Naval Instructor and Curriculum Developer and recipient of two Navy Achievement medals along with numerous citations and letters of commendation during his service. He also served as a nuclear power plant mechanical operator on a submarine.

“I owe my career in fluid power to my U.S. Navy training and experiences. I also credit the skills and knowledge passed on to me by other crew members within my division as they were always willing to turn evolutions into teaching moments.”

Bio: Sales Specialist, Seven Stars Industries and IFPS Vice President Marketing and Public Relations
Military Experience: Justin was a mechanical supervisor of the nuclear power plant engine room of Trident Class submarines. He held several collateral duties for the Mechanical Division of the Engineering Department to include the training program coordinator and director of assurance.

“I learned the importance of being on time, the delicacies of leading a group of people, and the power of taking responsibility for my work and my commitments. I learned the value of integrity in the work I perform and oversee. I learned that when supervising a power plant, or any production facility, having the competency to operate and maintain every piece of equipment is vital to safe production and effective management.”

Bio: North American Interim Training Manager – Sr. Training Specialist, Eaton Hydraulics Group
Military Experience: Denis began his career in the U.S. Navy. His primary job specialty incorporated the operation, maintenance, and repair of major and minor caliber weapons delivery systems, associated small arms, and support equipment. He has over 20 years of honorable military service. He completed a tour as a military instructor where he qualified as a Master Training Specialist and Senior Instructor of the Year.

“The U.S. Navy provided a structured learning environment committed to the proper understanding of fluid power and related technical disciplines. This baseline understanding was reinforced over the years with real-world experience where proper maintenance, troubleshooting, and repair are the only acceptable options.”