As Far as the Eye Can See: A 62-Meter Rotor Blade Sets Record

When standing in front of the SCHEUERLE InterCombiSP with the clamped rotor blade of a Vestas V126 wind turbine, it seems to drill directly into the sky. 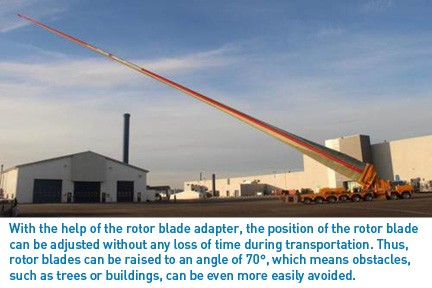 SCHEUERLE customer, Wiesbauer, easily managed to complete a series of tests at the Vestas production facility in Lem, Denmark thanks to the rotor blade adapter. With a length of 62 meters and a weight of 13.4 tons, the clamped wind turbine rotor blade adapter set a world record during the test.

Transporting rotor blades to wind power stations very often presents haulage companies with a challenging task. Especially on the “last mile,” the transport is often more difficult, especially when tight corners or obstacles need to be overcome. The second generation of the rotor blade adapter from SCHEUERLE is now available with benefits from the experience gained from the first-generation version. With the help of the rotor blade adapter, rotor blades can avoid obstacles, such as trees or buildings. Also on gradients or steep winding roads, the position of the rotor blade can be adjusted without any loss of time during the journey. Thus, rotor blades, depending on the type of wing, can be raised to an angle of 70° in order to comfortably avoid obstacles on the route. Due to an integrated slew drive, the rotor blade can be rotated around its longitudinal axis in order to provide as little wind resistance as possible. In the process, a sensor issues a warning signal if a parameterisable wind speed has been exceeded. Hydraulically controlled counterweights ensure precise adjustments, even on the most unfavorable ground conditions during self-propelled driving. 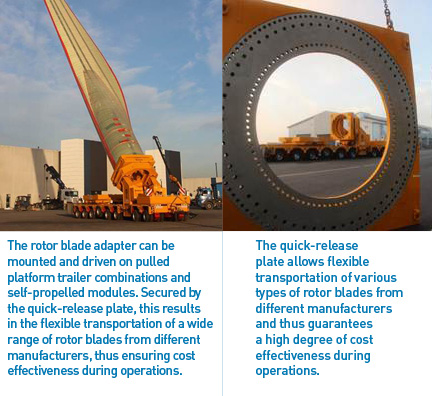 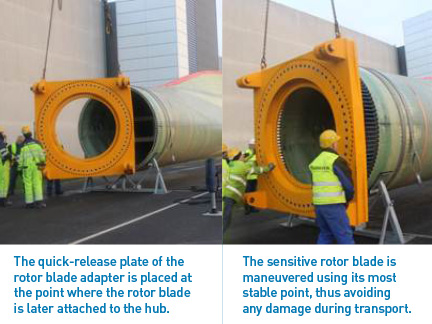 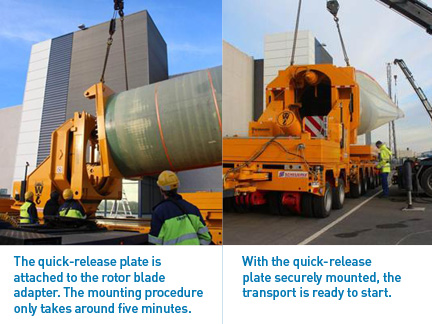