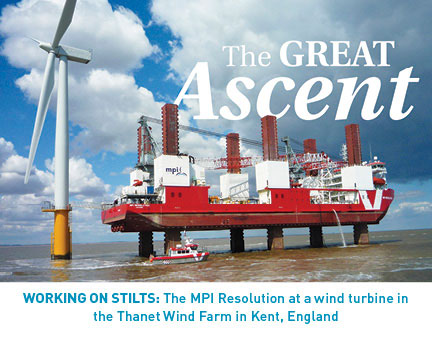 Offshore wind farm installations rise out of the sea and stop only when high above the waves. These massive systems are absolutely indispensible because they stand firmly on their legs on the seabed, so work can continue even in rough seas.

A Question of Precision

The jacking system software provides for the smoothest possible transitions between various operating modes, pressures, and loads—thus helping to reduce wear. It guarantees exact control of all the acceleration and deceleration phases, parallel and opposing cylinder strokes, and smooth transfer of massive loads. In addition, it enables automation transition between the four operating modes: leg lowering, platform lifting, platform lowering, and leg lifting.

The transition between setting down the legs on the seafloor and lifting the platform is particularly demanding because during this transition, the platform follows the rise and fall of the ocean, putting enormous strain on the system. The continuous jacking system hoists the platform out of this critical situation faster than an intermittent lifting system could.

How the Hydraulic Jacking System Works

The jacking system climbs up or down the platform’s legs, much like a monkey. Two yokes surrounding each leg are fitted with sets of holding pins. The first such yoke snaps its pins in place in holes along the leg. The cylinders of this first yoke then lift the platform. By the time the first yoke’s cylinders have nearly reached the end of their strokes, the second yoke has moved into position to insert its set of pins in the mating holes. Those pins at the second yoke now take over the load. The pins at the first yoke retract and the cylinders raise the first yoke so that its pins can again assume the load in the next position. This new continuous jacking system eliminates any interruptions during the lifting or lowering operation. It thus attains a constant jacking speed of one meter a minute or more.

Working Together to Achieve Savings

The control software and drive system not only provide higher speed during the lowering and lifting operations, but also reduce power consumption. The system’s HS4P hydraulic controls implement flow control for the jacking system, pressure regulation for the crane or winch, and power control to minimize energy use. Integrating the various hydraulic functions also boosts redundancy and reliability—and the higher performance with lower power consumption reduces the platform’s investment costs. The integrated system also reduces space requirements and weight through secondary-controlled drives for the crane. The new hydraulic continuous jacking system also supports today’s increased demand for installation platforms—and tomorrow’s. The EU Commision anticipates that investment of 200 billion euros across Europe will be devoted to wind farm installation by 2030. There’s still a lot of room to grow for continuous jacking.