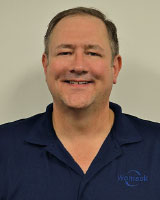 As an employee at Womack for 26 years, I have had several jobs. I spent almost 10 years as an outside salesman in West Texas, working around oil field equipment and mobile units. From there, I moved to Dallas, and for three years I supervised the Publication Department and trained inside and new outside salesmen. After driving a desk for those three years, I asked the company to put me back into outside sales, and in 2001, I moved to East Texas and became an outside salesman. My customer base was steel and wood mills, foundries, and other manufacturing, which means I was selling industrial hydraulics components and systems to my customers. In 2010, after a short-term medical leave, I became the department leader for the hands-on training unit. I was given the task to expand the company’s product offering, and one of the things I did was develop a one-day safety seminar for fluid power. Working on that safety seminar reminded me of my first car—a 1965 Ford Mustang.

My dad purchased the brand-new Ford Mustang in August 1964. I was only three years old at the time, but that car has been part of my family, and I still own it. When Dad purchased that car, it didn’t have seat belts in the rear seat (my dad had those installed by the dealer).

I know how it was in the early 1970s when the automotive industry started talking about air bags. My parents, like so many other people, were against them because of the extra expense and how they were viewed as dangerous. Seat belts were not any different back in the 1950s and 1960s, and the public had a hard time accepting them.

People are reluctant to change, and people also don’t like to be told what to do. Today, if you go into an automotive shop, you will mostly likely see a sign that says “Safety Glasses are Required.” In 1970, the Occupational Safety and Health Act was signed into law, which established the Occupational Safety and Health Administration (OSHA). OSHA sets and enforces protective workplace safety and health standards, and one of those safety and health standards is to wear “Personal Protective Equipment” (PPE). OSHA tells us that PPE should be worn or used “wherever it is necessary by reason of hazards of processes or environment, chemical hazards, radiological hazards, or mechanical irritants encountered in a manner capable of causing injury or impairment in the function of any part of the body through absorption, inhalation, or physical contact.” In 1985, I wish that the shop I worked for had required PPE, especially safety glasses, because my wife once had to take me to the emergency room at four a.m. to have a piece of metal removed from my eye. But even today, people are reluctant, or forget, to use safety glasses.

When I began working on the safety seminar for Womack, I found there wasn’t a lot of information on safety in fluid power. There are international standards ISO 4413 and ISO 4414, the titles to which are General Rules and Safety Requirements for Hydraulic and Pneumatic Systems. But even though we have these safety standards on fluid power, do we use them?

Sometimes the reason that we don’t use these standards is because we don’t know about them. We never stop learning, and every day I realize how much I don’t know. When I started working with fluid power, I had heard about oil injection injuries. It was always a friend’s uncle who knew someone’s dad who had a finger cut off by a hydraulic leak on an airplane’s hydraulic system. I figured oil injection injuries were an urban legend. As I researched information for the safety seminar, I confirmed that oil injection injuries do occur. Based on the size of the orifice or the leak size and how high the system’s pressure, oil could come out of the pinhole leak up to and surpassing 600 feet per second. That is the velocity of a 38 special bullet. Oil injection injuries do occur, and while they may not be very common, it is common for workers to use their hands to check for hydraulic or pneumatic leaks.

So, how are we safe around a fluid power system? Following the standards and regulations established by others is one way, but so is having the knowledge of how a system works and taking the time to make safety a number-one priority. Today’s ongoing demand to get things done faster should not exclude the most important part of the job: Safety First! I urge you and your employees to be safe around fluid power equipment.

About the Author: Kent Darnell, CFPAI, CFPHS, is Hands-On Training Business Unit leader for Womack Machine Supply Co. and an Accredited Instructor for the International Fluid Power Society. This article is based on his presentation at the Fluid Power Systems Conference in November 2013. He can be reached at k.darnell@womack-machine.com.