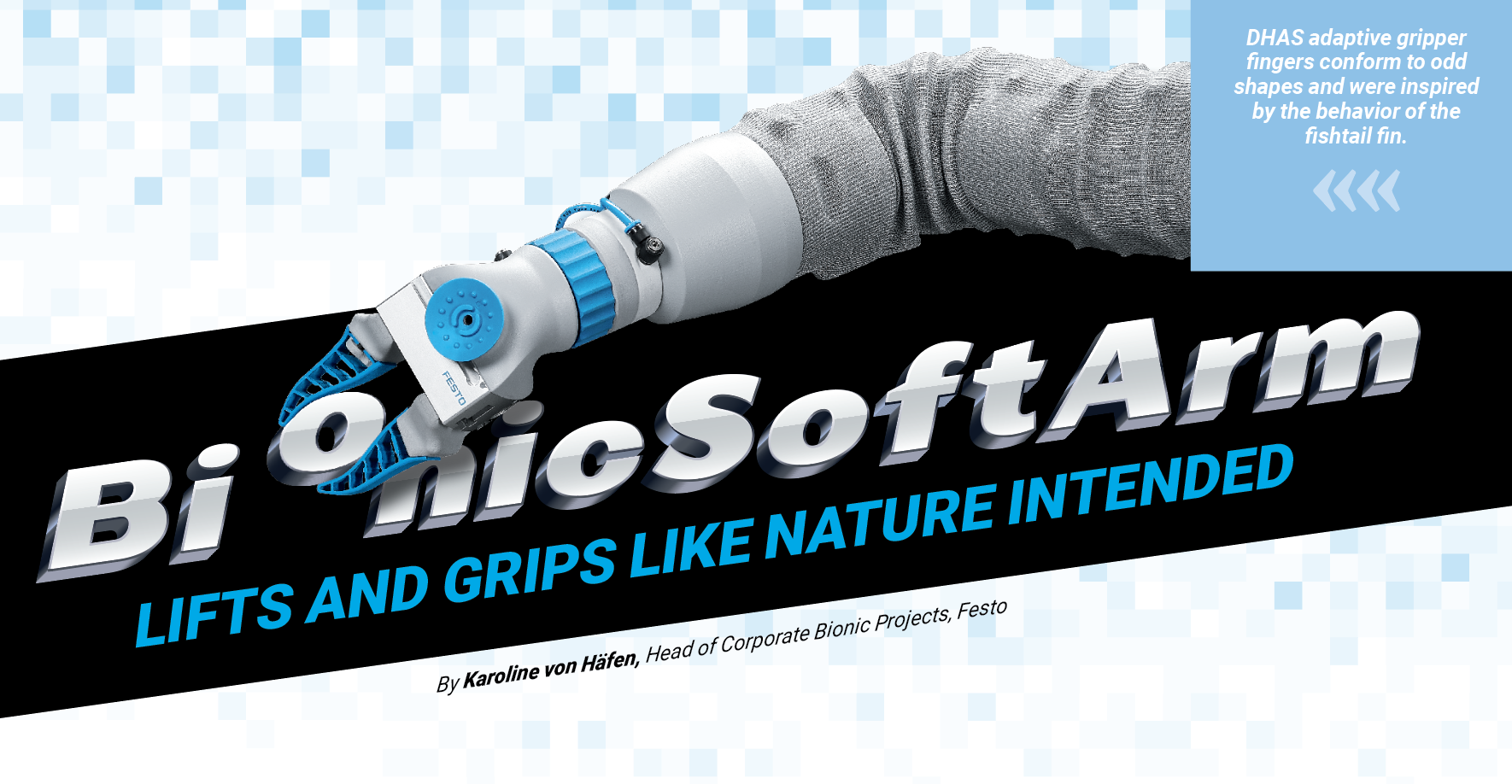 Like its two predecessors – the Bionic Handling Assistant (2010) and the BionicMotionRobot (2017) – the Festo BionicSoftArm robot’s movements and functionality were inspired by the elephant’s trunk. Whether supple and gentle or powerful and dynamic, elephants can not only lift heavy loads with their trunks and move them flexibly, they can also grip objects sensitively and precisely.

With its pneumatic bellows structures, the BionicSoftArm effortlessly masters the flowing motion sequences of its natural role model. Depending on the desired action, the robot’s pneumatically powered bellows can freely bend. The bellows are sheathed with an innovative 3D-printed textile knit fabric that allows expansion of the bellows structures in the desired direction of movement while simultaneously limiting movement in the opposite directions, which in effect creates the point of pivot in a nonmechanical hinge. The BionicSoftArm is one of the latest developments of the Festo Bionic Learning Network, an initiative to further industrial design by looking to nature for inspiration. 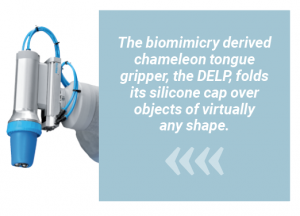 The natural-looking movements of the BionicSoftArm robot create a sense of familiarity for the user, which can increase acceptance for a collaborative work environment. In the event of a collision, the pneumatic kinematics automatically ease off. This inherent flexibility and the low dead weight allow the BionicSoftArm to be used without a protective cage.

Depending on the requirements, the arm’s length can be altered by adding or subtracting modular pneumatic sections. As many as seven degrees of freedom are possible with the BionicSoftArm. The robot can move around obstacles and work in tight spaces, giving it an exceptional work envelope.

The strengths of pneumatic drives have always been their robustness, low cost of acquisition, and high power density. These attributes enable pneumatics to apply comparatively high forces with a low dead weight. The kinematics make it easy to adapt the BionicSoftArm to various tasks and locations within a production environment. The elimination of costly safety devices such as cages and light barriers shorten and simplify installation. The BionicSoftArm points the way toward cost-effective alternatives to classic robots and fits the needs of a collaborative work environment.

The BionicSoftArm is operated intuitively via the Robotic Suite, a graphical user interface that was developed specifically for lightweight robots. With a tablet, the user can easily teach actions and set parameters. Defined work steps can be arranged in a time line. Sequence changes are as simple as dragging and dropping the step to another position of the workflow.

The pneumatic bellows are made of sturdy elastomer. Each bellows is covered with a 3D-printed textile featuring a two-layer knit fabric. The fibers are oriented so that the bellows can expand in the direction of movement while resisting movement in the opposite direction. The hoses for airflow are positioned on the outside of the robot so that they do not disturb movement or become constricted when the arm moves. A textile cover pulled over the arm protects the tubing from damage and keeps it in place.

The control and regulation of complex kinematics is made possible by the Festo motion terminal, the world’s first cyber-physical pneumatic-motion-control system. The motion terminal’s digital valves change functionality based on various combinations of downloadable motion apps. Through the internal control algorithms of the motion apps and the piezo-based valves, flow rates and pressures can be exactly dosed and also varied to any setting in multiple channels simultaneously.

Every part of the robot is considered a model, and position control is achieved through modeling. The required parameters are either calculated or determined using parameter identification. The necessary control algorithms run in real time. The condition of the BionicSoftArm is monitored continuously through pressure and absolute position sensors.

The range of applications of the modular robot arm can be further expanded by combining the BionicSoftArm with various grippers with designs also inspired by nature. These grippers were designed to provide the widest possible adaptivity to a variety of objects and shapes. 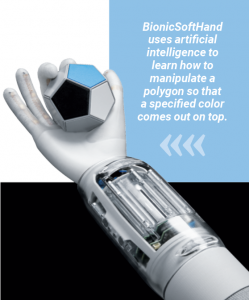 The BionicSoftHand, for example, consists of flexible pneumatic bellows structures and soft materials. The BionicSoftHand not only grips but can also manipulate objects similar to the way a human hand does. It learns manipulation through artificial intelligence and was developed through the Bionic Learning Network.

Thanks to its modular design, there are BionicSoftHand variants with three or four fingers that function like soft pincers.

The biomimicry-inspired chameleon tongue gripper DELP and fish-fin grippers DHAS are former Bionic Learning Network projects that have since been commercialized.

The BionicSoftArm is the synthesis of a design inspired by nature and the latest control technology and 3D-printed materials. This innovative robot illustrates how fluid power is evolving in the 21st century and points the way to future developments.