What is the Real Size of that Pump?

Revisions to ISO 8624: A standard for determination of the derived capacity of hydraulic pumps and motors

Hydraulic pumps and motors are used in a wide number of systems from mobile to industrial markets. The integrators of such systems must consider the performance characteristics of the pump or motor used when designing these systems to efficiently and safely complete a task. A study [1] of the impact of fluid power usage in the USA estimated the average efficiency of a hydraulic system is 22% and as low as 14% in certain mobile applications. Today’s market is so competitive that it demands higher efficiency compared to the last 60 years. Part of improving the efficiency of a system is selecting and operating its components to function at their peak performance. However, the selection process (in practical engineering terms) should be driven by the performance characteristics of the component as they are presented in a data sheet, such as in graphical form or in a table. When selecting a pump or a motor to perform a job, the engineer must account for the efficiency of the component.

Determining the efficiency of a pump or a motor based on test data requires knowledge of the derived capacity (aka: derived displacement) of the machine. There are several methods for estimating or “deriving” the displacement of a pump or motor, but some of those are more accurate than others.

The zero-pressure intercept method uses the term high pressure flow q divided by speed n, to represent displacement Vi which is only valid if the change of flow with respect to change of speed is constant. That is, ∂q/∂n = constant = Vi   which implies that q = Vi · n  and thus Vi = q/n.

For that reason, a group of fluid power experts has been charged to revising this standard. The work began in September of 2017 and has concluded that a better available method is the calculation of the derived displacement using the Toet [2] method. The Toet method is a two-step method that more accurately estimates the displacement of a pump or motor [3]. The zero-pressure intercept method is depicted in Figure 1. 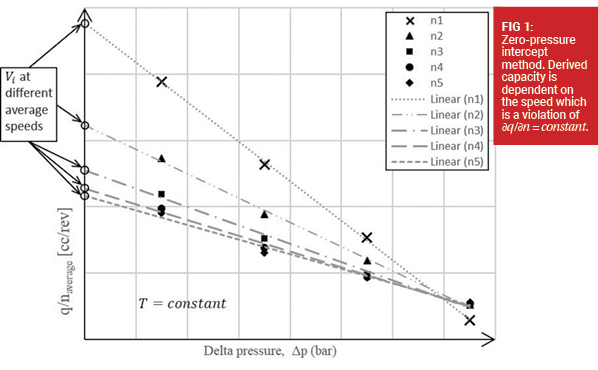 The first step of the Toet method requires the calculation of the slope, (∂q/∂n)i  , of the high pressure flow vs. shaft speed from a linear fit for a fixed Δpi  . This process is repeated for several Δpi  as shown in Figure 2. The second step of the method calculates the intercept of  ∂q/∂n  vs. Δp line which corresponds to the derived capacity, Vi . The second step is shown in Figure 3. 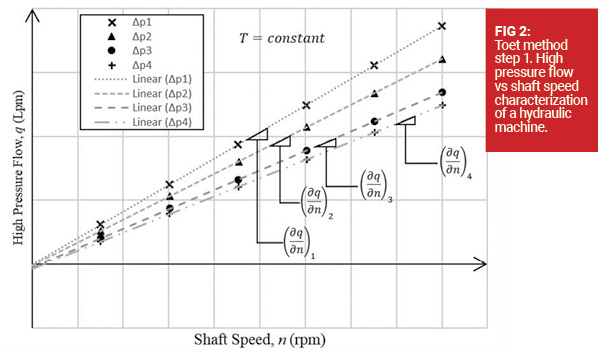 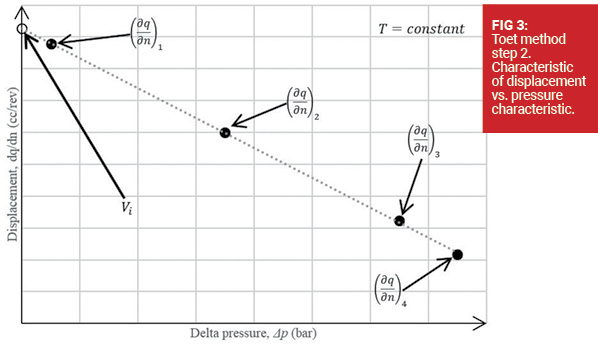 The advantage of this method is the consistency of the results at various temperature levels, T , implying independence of temperature. Unlike the zero-pressure intercept method, the speed dependence of derived capacity does not exist in the Toet method. The proposed revisions to the standard will be discussed with various international experts in fluid power and will possibly be taking effect before 2020.

If you would like to get involved in fluid power standard development, please contact Denise Husenica (dhusenica@nfpa.com) for more information.