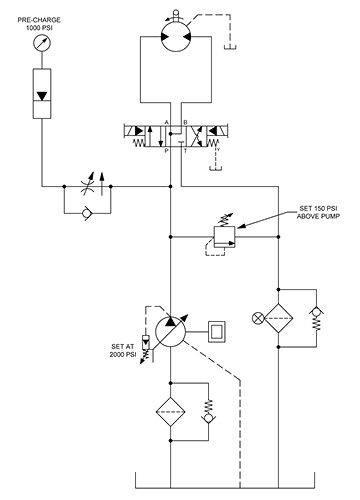 A contractor for a power and light company was hired to pull new wires and cable needed for a new plat of homes being built. The hydraulic puller unit incorporated a small gas engine and pump assembly to rotate a hydraulic motor with a rope attached to the cable they were pulling. The unit would pull enough cable to reach the next power pole plus extra to reach the ground. They would stop the pulling, disconnect the rope from the cable, thread the cable over the next pole, and down to the puller that was moved to the next position.

On one of the pulling cycles, the motor speed increased to a high rate decelerating down to a slow rate. The team checked the accumulator pre-charge and re-adjusted the flow control several times and the motor would still start off at a high speed and ramp down to a slow speed.

Any idea what is causing the problem?

The pressure compensated flow control should only allow a fixed rate of oil to pass regardless of the accumulator’s outlet oil pressure. The hydrostat inside the PC flow control was stuck in the open position rendering the flow control as a normal orifice that changes flow if the inlet or outlet pressure changes.