PIRTEK was first established in Australia in 1980 and is a leader in on-site hydraulic hose replacement with nearly 400 locations in 23 countries and more than 2,000 mobile hose shops. In the United States, the company currently has 54 locations and plans to top 200 locations nationally by the end of the decade. PIRTEK’s mission is to provide franchisees with the opportunity to be in business for themselves, but not by themselves.

Gwyn O’Kane, CFPE, is vice president of franchise development at PIRTEK and an active member of IFPS Chapter 49 in central Florida. In this interview, Mr. O’Kane tells the Journal about how IFPS certification ensures the safety and success of PIRTEK and its employees. 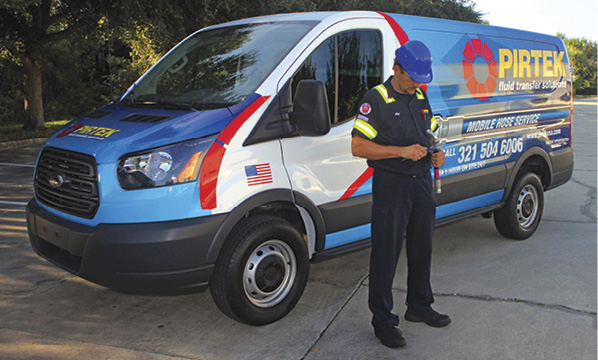 What makes PIRTEK stand out in the industry?

Our uniqueness stems from two distinct areas. First, our service technicians are available to replace failed hoses on industrial and mobile hydraulic machines, on-site, 24-hours a day, 365 days a year. We offer an estimated time of arrival on-site in less than one hour from a customer’s call to the performance of service in the specific service area. Once onsite, technicians remove failed hoses; manufacture a replacement; and then clean, test, tag, and install it all on the job site. We also perform installations and offer preventative maintenance programs to reduce our customer’s downtime and expenses that result from hose failure. Second, PIRTEK is a franchise business format, which makes us very unique in the industry. We also sell and service our own hydraulic hoses, further differentiating ourselves within the franchise industry. We are an industrial business-to-business franchise opportunity. Our owners operate a “hose service center,” offering trade counter service and a fleet of mobile hose vans all from the same location.

What makes PIRTEK such an attractive place to work?

I began working at PIRTEK as a mobile sales and service technician in 1989 after working for Ford Motor Co. in New Zealand as an engineering cadet. At the Ford factory, I was merely a small cog in a big machine. But when I joined PIRTEK, I fell in love with the small team/family environment of a PIRTEK center. I am very proud of the fact that after 18 years in the United States, we have many employees within our organization who have been with us for over a decade. PIRTEK has provided many employees with a great place to work, an excellent career opportunity, and an entrepreneurial opportunity for those who desire to own their own business. 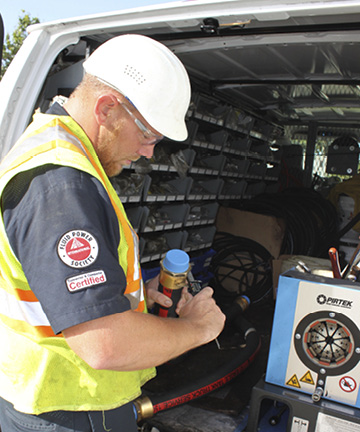 Why is IFPS certification important to PIRTEK?

The IFPS has become immensely important to our organization. We are proud to be experts in hoses and fittings. The Connector and Conductor certification (C&C) provided a means to validate that expertise. The IFPS C&C shirt patch that our team members earn once they become certified has become a badge of honor for our technicians. From a company perspective, the IFPS logo has become a symbol to our customers that we hold ourselves to the highest international standard and that they are working with a professional company. The single most important reason that we support the IFPS and certification is that it helps keep our employees safe. I would encourage everyone involved in the fluid power industry to get certified for this reason alone, because nothing is more important than ensuring we all return home safely to our families every night.

Why is IFPS certification important to the fluid power industry as whole?

I am sure most, if not all, involved in the fluid power industry would agree that fluid power is more complex and has the potential to be more hazardous than the automotive, plumbing, or electrical industries. To a certain extent, fluid power requires us to be familiar with all of these industries. These industries are heavily regulated with certifications and licensing requirements. To a large degree, we are an industry that is self-regulated, and for that reason, it is incumbent upon us to support programs like IFPS certification to ensure that we remain safe and maintain a high level of professionalism in the industry.