Some fluids with very good lubricity and viscosity characteristics may prove caustic to the material in pumps, actuators, or valves, especially when hot.

There are three areas of component compatibility that the designer needs to consider. The first is within the circuit, the second is chemical reaction, and the third is temperature.

Chemical compatibility is an important consideration when choosing the hydraulic fluid for the system. The inner tube of the hydraulic hose must not react chemically with the fluid. The same can be said of the seals within the components. Water is a chemical that can adversely affect the seals, so special seals must be applied where high water-content fluid is used. Water-glycol fluids attack zinc, cadmium, and aluminum, so these elements must not be located anywhere in the circuit in order to prevent contamination and deterioration of the hydraulic system. It is important that the designer be aware of the composition of the parts that make up the system components.

Many seals are manufactured in a process that includes heat to cure the product in the mold. This process is very specific and provides the Duron rating of the seal. Exposing seals to heat beyond their rating will result in continued curing, making the seals brittle and without proper elasticity.

The designer must be familiar with the chemical and temperature compatibility charts for both seals and metal parts (see chart) so that proper choices can be made. 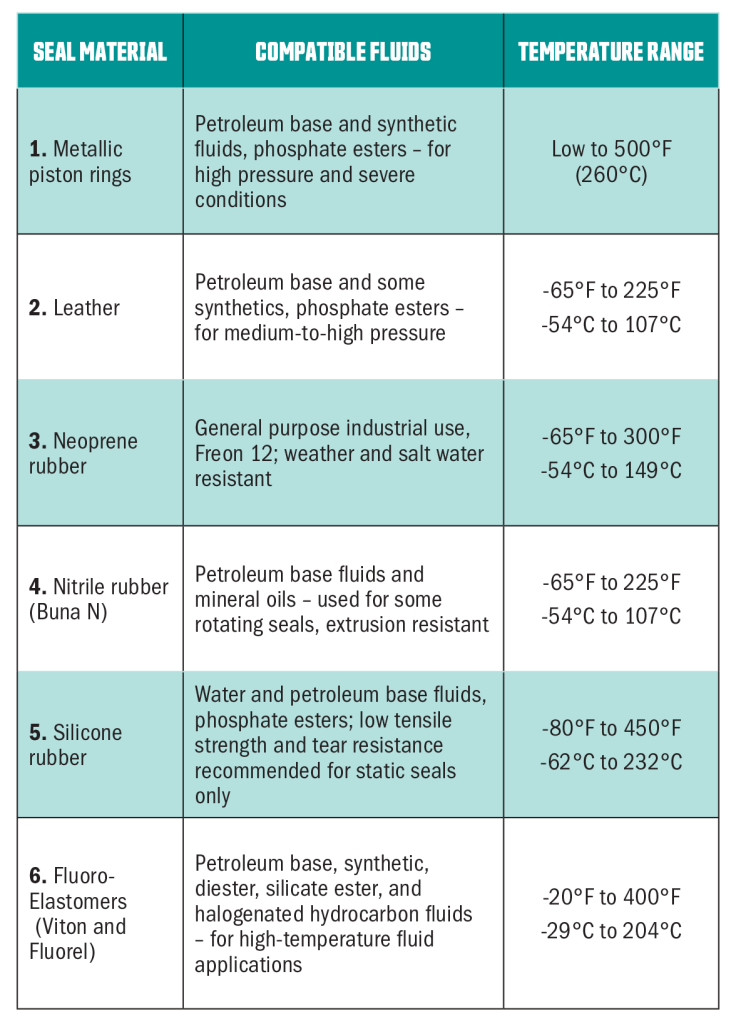 The starting and operating temperatures of the machine are also used to select hydraulic seals that retain their sealing properties in ambient and hot conditions. Neoprene, a general-use sealing material, has a temperature range of -65°F to 225°F (-54°C to 149°C). Neoprene is satisfactory for static gasket seals and O-rings with petroleum base fluids,  but is not as well suited as Nitrile rubber (Buna N), urethane, and even leather, for dynamic applications. Extremely cold and hot conditions require a sealing material that is more tolerant of heat. Viton and silicone compounds are the sealing material of choice for applications with temperature extremes.

The ability of a sealing material to prevent leakage is tested by measuring the durometer (indentation hardness), creep, and compression set after deformation. The sealing compound must be hard enough to resist wear and extrusion for the clearance gap and pressure that will be encountered, yet still be soft enough to maintain a seal during continued use. Seals have a tendency to swell in the presence of hydraulic fluid. Some swelling is permissible, and even somewhat desirable, in maintaining a fluid-tight seal. But excessive swelling and accompanying softness of dynamic seals increases friction and the tendency to abrade. Twenty percent swelling is considered the maximum allowable swell; swelling by a factor of 40% to 50% is allowable for confined static seals.

1. Referring to the chart, which seal material has the widest temperature range?

2.What is the reason for knowing the chemical compatibility?

b. Choosing the correct seals.

c. Matching the fluid to the pump and/or motor.

e. All of the above.