Cylinder Speeds Up On Its Own 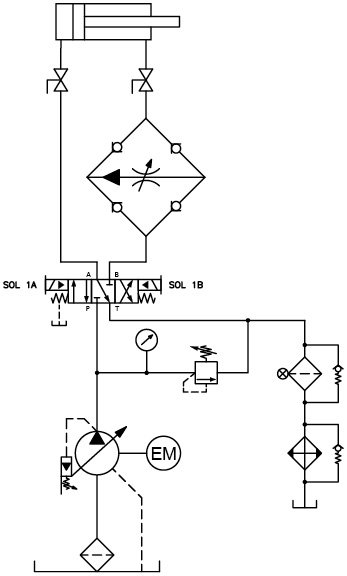 An aluminum mill has a system that pushes a large aluminum ingot from one conveyor to another.

The operator complained that the pushing speed kept increasing over time even though he adjusted the meter-out flow control clock-wise to slow it down.

Once both maintenance and the operator agreed on the proper procedures, the cylinder still did not respond the way it was designed. They felt the cylinder was OK since it was a recent rebuild by a repair shop and worked fine since its installation 4 to 6 weeks earlier.

They then called us describing the problem and faxed the circuit (shown above) for the system to us to review. They were trying to understand why there were 4-check valves in the flow control circuit and could one of them be the problem.

What do you think is their problem?

Meter-out speed controls on single-rod cylinders cause the rod-side cylinder pressures to intensify higher than the cap end, which is normally the maximum pump pressure setting. If the cylinder develops a piston leak,  it acts like a regenerative circuit, forcing rod-side oil to the cap end, speeding up the cylinder. We told them to close off the isolation ball valve on the cap end and shift the control valve to retract the cylinder. If it extends, the cylinder is leaking past the piston seals, causing this speed problem.